High intensity focused ultrasound (HIFU) is a relatively new cosmetic skin tightening treatment that some view as a non-invasive and painless substitute for facelifts. It uses ultrasound energy to stimulate collagen production, resulting in firmer skin.

Back to work
immediate

How many treatments?
for an optimal result 1-3 treatments

HIFU stands for high-intensity focused ultrasound. It is an advanced cosmetic technology that can significantly tighten and lift multiple areas of the face and body, reduce the signs of aging and improve skin tone in a single session, with potentially long-lasting effects.

HIFU is best known for its application in tumor treatment. The first reported use of HIFU for aesthetic purposes was in 2008.

HIFU was then approved by the Food and Drug Administration (FDA) for eyebrow lifts in 2009. The device was also approved by the FDA in 2014 for improving fine lines and wrinkles on the upper breast and cleavage.

Several clinical studies have shown that HIFU is safe and effective for lifting the face and tightening wrinkles. Users were able to see results within months of treatment without the risks associated with surgery.

So far, HIFU has shown promise as a treatment that could replace a facelift, especially for younger people who are reluctant to accept the risks and recovery time associated with surgery.

What does HIFU do on the face?

HIFU uses focused ultrasound energy to reach the layers of skin just below the surface. The ultrasonic energy causes the tissue to be heated quickly.

As soon as the cells in the target area reach a certain temperature, they experience cell damage. While this may seem counter-intuitive, the damage actually stimulates cells to produce more collagen, a protein that gives structure to the skin. 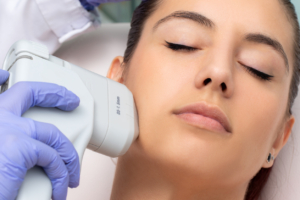 The increase in collagen results in tighter, firmer skin with fewer wrinkles. Because the high-frequency ultrasound beams are focused on a specific tissue location under the skin’s surface, the upper layers of the skin and the adjacent tissue are not damaged.

Does HIFU work for everyone?

HIFU may not be suitable for everyone. In general, the procedure works best on people who are over 30 years old and have mild to moderate sagging.

Older people with more sun-damaged skin, severe sagging or very sagging skin on the neck are not good candidates and may need surgery.

HIFU is not recommended for people with infections and open skin lesions in the target area, severe or cystic acne, and metal implants in the treatment area.

What are the benefits of high-intensity focused ultrasound?

According to the American Society for Aesthetic Plastic Surgery (ASAPS), HIFU and other non-surgical alternatives to the facelift have grown in popularity in recent years. The total number of procedures performed increased by 64.8 percent between 2012 and 2017.

HIFU has many aesthetic benefits, including:

The study results are promising. A 2017 study of 32 Korean participants showed that HIFU significantly improved skin elasticity of the cheeks, lower abdomen and thighs after 12 weeks.

In a larger study of 93 people, 66 per cent of those treated with HIFU noticed an improvement in the appearance of the face and neck after 90 days.

While HIFU carries far fewer risks and costs than a surgical facelift, the results may not last as long and repeat procedures may be required. It costs just under 800 euros to have the face tightened with HIFU. If you also want to have your neck tightened, you can expect to pay around 300 euros extra. At first glance, this is not a small amount. But if an operation is out of the question, which by the way usually costs considerably more, this treatment is worth every penny in given the obvious results!

The HIFU facelift is not a painful procedure. However, you may feel some discomfort when the ultrasound is irradiated into the skin, especially in sensitive areas such as around the mouth and under the chin.

Is the HIFU procedure safe?

The HIFU facelift is a safe and non-invasive procedure. Our equipment and treatment are certified. schön skincare by Peter Tuguntke uses only the latest and most advanced technology to provide treatments that are designed for your comfort and safety.

Treatment duration varies depending on the extent of the treatment between 20 (eyebrow lift only) and 90 minutes (tightening of the skin in the entire face, chin and neck area).

HIFU lifting is particularly suitable for clients with slight to moderate sagging of the skin around the eyes, cheeks, chin contour (“drooping cheeks”) and chin (double chin) as well as for tightening the neck and smoothing the skin in the décolleté area. Body treatments on the inner thighs, abdomen and upper arms are also possible, but require the use of a body handpiece with at least approx. 10 mm focal depth.

The application can be classified in the field of apparative high-tech methods as one of the most effective possible steps before a surgical facelift, but not as a substitute. The application is ideal for all clients who would like to avoid a surgical procedure, scars, injections or downtime. The treatment is also very suitable as a preventive measure for the first signs of ageing of the skin from the age of 30 and to delay a possible operation. Another advantage is the customer-friendly application of the method: as a rule, only one or two sessions are required.

How does ultrasound like HIFU work in cosmetic treatments?

The HIFU procedure itself has been used since the 1990s, among other things in oncology for the non-invasive therapy of tumours, and is valued for its precision and safety. Specially adapted to the tissue layers of the skin, more and more devices have been developed for use in aesthetics in recent years.

In contrast to conventional ultrasound devices used in cosmetics and physiotherapy, HIFU technology focuses the sound waves extremely at a predefined depth in the target tissue. This focussing enables a precise, brief heating of the target tissue to approx. 50-70 C°, limited to the so-called “focal point”. Depending on the manufacturer, such a focal point is approx. 1 x 1 mm in size. The tissue outside the focal point remains completely intact. Depending on the size of the treatment area, several thousand (for a facial treatment approx. 12,000 to 20,000) focal points are set in different skin layers, up to the SMAS running below the subcutis, during only one session. The intensity of a HIFU treatment can usually be adjusted to up to 2-3 J/cm².

When I see the first results of HIFU?

After your HIFU treatment, you may see some initial effect, but the final results will take place over 2-4 months as your body naturally regenerates collagen.

A booster treatment to maintain the results is often recommended and can be scheduled approximately every 12-24 months.

How long does it take to recover from a HIFU treatment?

This is the best thing about the HIFU facelift – there is no downtime! You may experience slight redness after treatment, but this will subside within a few days. After the treatment, you can immediately return to your daily activities with radiant and fresher skin.

Are there side effects with HIFU?

When used correctly, the treatment has very few possible side effects. While ultrasound therapy is considered a safe method of facial tightening, no procedure is faultless and there are certain side effects to consider before getting a HIFU Lifting. The immediate side effects may include erythema formation and slight swelling of the treated tissue, whereby the erythema usually subsides within approx. 30 minutes to a few hours.

In the following days, a muscle ache may develop, which can last from a few days to about 2-3 weeks. A temporary, localised “pressure pain” or a feeling of numbness in some areas, which however subsides after a few days, is also not unusual. Haematoma formation can also occur if larger vessels are touched during application.

What does ultrasound like HIFU do to the skin?

In HIFU treatment using focused ultrasound waves, the skin surface is not affected or injured.

The lesions are placed at defined depths (1.5 mm / 3 mm / 4.5 mm) using temperatures between 60 and 70 degrees to achieve the desired effect.

HIFU stimulates collagen formation (the body’s own regeneration process), resulting in a demonstrable resurfacing and tightening of the deep tissue layers under the skin, within 3 to 6 months.

In contrast to other facelift methods, HIFU also improves the elasticity of the skin.

How many HIFU sessions are needed?

Most clients only need one HIFU treatment. However this may be based on the degree of skin laxity, the biological response to ultrasound energy and the individual’s collagen-building process, some clients may benefit from additional treatments.

For face lifting is usually one session enough. For the treatment of partial areas, e.g. the eye area, as well as for treatments of the neck and individual body areas such as the inner thighs, 2-3 sessions are recommended. If several sessions are performed, they should be scheduled at intervals of about 6-8 weeks.

BOOK AN APPOINTMENT
Scroll to top